One of the benefits of having a birth blog is I get the chance to read a lot of birth books!  I also have people sending me books to read.  I love that.  I recently finished reading Birth Day: A Pediatrician Explores the Science, the History, and the Wonder of Childbirth 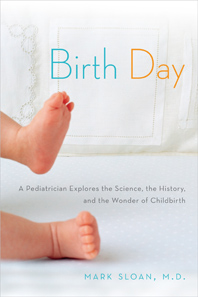 It is about birth and the first few minutes of the baby’s life.   I have read a LOT of books about birth, this one was different because it was written from the pediatricians perspective, and taking a deeper look at the baby’s aspect.  I liked this and learned some new things!

Part 1 covers all about being born. You see Dr. Sloan’s progression from med student to pediatrician.  He covers what happens at birth and the first 5 minutes after vaginal birth.  There is a chapter on cesareans.  I learned a bit more about the origin of cesareans and how they came to be what they are today.  This quote is very telling

Here in the early years of the twenty-first century we have reached a point of high medical irony… it now can take more courage – or foolhardiness- NOT to do a cesarean than it takes to do one.

This is sadly so very true.

Part 2 covers Pain and Politics. The chapter on B.E. Before Epidurals was fascinating.  As women moved to the hospital to birth and didn’t have the support of family or other women, the pain became more intense and women wanted relief from that.  This eventually led to Twilight Sleep.  I remember talking to my Grandma and asking about the birth of her 5 kids.  She didn’t remember anything about their births.  Reading this section made me see how far we have really come.

I did find it interesting that feminists played a big role in pushing for painless childbirth.

Feminists saw Twilight Sleep as their due – medical men had oppressed laboring women quite long enough.

Today most feminists don’t seem to have much interest in birth.  Moms are being forced to have surgery to have babies (in VBAC banned hospitals for example), they don’t seem to care.  This seems like a very important woman’s issue to me, worthy of fighting for.

The next chapter talks about pain relief today.  This looks at why epidurals are good and also the risks associated with them.  It also has a section on nitrous oxide which is used commonly in other cultures during birth.  It is a shame it is not readily available in the US.  I thought this information was very informative.  If moms knew about this option, they would ask for it and if enough moms ask, then they can get it!

Hypnosis for birth is touched on briefly in this section.

It’s no doubt easier to find a labor hypnotist in a large city than in an isolated rural area.

Well, this is the beauty of the Hypnobabies Home Study.  It is a complete hypnosis for childbirth course and can be learned ANYWHERE!

He talks about the challenges of having a Randomized Controlled Trial for anything regarding birth.  This is the “gold standard” of medical research.  But it is nearly impossible to assign moms different things to do or take during their birth.  Moms want to be in control.  In one case moms were told to be in certain positions for a certain amount of time.

It didn’t work.  Ninety percent of the women assigned to a specific position in one study took a “hell with that” and dropped out, opting for more comfortable positions than the researchers had planned for them.

The third section is titled:  Significant Others, it covers:  Dads, midwives, OBs and doulas.

By the 1940’s, non-medical birth attendants had largely disappeared; childbirth became a matter of a doctor, a nurse, and an often unconscious laboring woman.

the nurses themselves began to disappear

Thanks to EFM the nurse could sit and watch a screen instead of going into the mom and dad every 5-15 min to check on baby and reassure them all was well.

Her job, in sum, is to support a woman’s prenatal desires for the birth of her child while helping her adjust to the realities of the actual labor.

I thought that was a nice definition.

My favorite section was the 4th: Looking at Babies

Chapter 8 looks at what the baby is experiencing in utero.  This section was really fascinating for me to read.  It is amazing all that a baby can do well before they are born.

It can take a half hour or more, but eventually he succeeds in scaling Mount Mama.  Cradling his mother’s breast between his arms, he moves his head back and forth, licking and smelling her nipple.  At last he latches on and begins to suck, all the while watching his mother’s face.  Kission accomplished’ in less than an hour he  has figured out where the food is, how to make it appear , and who he can count on to make more of it.  HE uses all his senses in that journey; a newborn sees, hears, smells, feels and tastes his way to his mother’s breast, guided by the sensory learnings of the womb.

Chapter 10 was a guided tour of the newborn body.  I learned that newborn babies can swallow and breathe at the same time for the first four months of life.  Their bodies are made to do this!

He talks about circumcision and I think does a good job.  He covers the pros and the cons and basically says he doesn’t recommend his patients have it done, but let’s the parents make an informed choice.  Looking like Dad isn’t a good reason, he adds.

The most striking thing to me after all these years (3000 births) is how often such an incredibly complicated process goes right.

I think this is a great book for anyone working in the birth field to read.  There is a great review of the history of childbirth and the part of the baby’s experience in the womb and with birth are very informative and enjoyable.

I think many expecting moms would learn a lot by reading the book.  However I would suggest that an expecting mom skip the first section.  As with almost any birth book, there are scary stories inside.   Authors share the exceptional stories, which is what make books exciting and in this case show that a pediatrician is needed at some births.  I think pregnant moms shouldn’t read these stories.  They have enough to worry about.  She could safely read parts 2, 3 and 4 and save the first part of the book to read after her baby is born!  (Hypnobabies Moms should probably skip section 2 as well)