I was so happy when I reader offered to share her story of her external version for my X day.  I had not thought of a good topic for today.  So here is Sarah’s story of how her home birth was almost derailed by a breech baby, but how an external version helped her baby turn head down.  She went on to have a wonderful home birth. Thanks Sarah for sharing!

I gave birth to a beautiful baby girl on January 25, 2011 at home. We named her Nellie Joy. Her birth was intense, exhilarating and beautiful…but it almost didn’t happen the way we planned.

This is Nellie’s story.

My first baby was born in the hospital. It was a typical hospital birth. We had taken Bradley classes and hoped for a natural birth but I was forced into an induction 41 weeks, 4 days. I was given cervidil, then pitocin, had my membranes ruptured, got an epidural, and pushed out a healthy baby boy. Many would call my son’s birth “normal” but I found it to be traumatic in that none of the decisions that were made about my care (or his for that matter) were left up to me. I felt powerless, out of control, and hopeless for most of my hospital stay. I spent many weeks in therapy to help me process the experience which was very healing.

So when I became pregnant the second time, I knew that I wanted something different, and my husband and I decided to have a home birth. We found a very competent Certified Professional Midwife, began prenatal care, and everything went along just fine without any complications. I began the Hypnobabies home study course and felt completely prepared for a natural birth. Then one night at 37 weeks, just before Christmas, while lying on my left side in bed, I felt the baby moving a lot and felt a lot of pressure on my left hip bone. I didn’t think anything of it until 2 days later at my prenatal appt. when our midwife, Liz, was palpating my belly and asked “Has this baby had any big movements lately?” She was having trouble determining the baby’s position with just her hands so we agreed to do an ultrasound. The ultrasound confirmed my worst fear…our baby had turned breech in my ninth month of pregnancy, after being head down all along.

With only 2 weeks until my due date, I immediately began doing everything I could to turn the baby. I did breech tilt and inversion exercises twice a day, listened to the Hypnobabies “Turn your breech baby” track, visited the Chiropractor every other day, and prayed, prayed, prayed.

But after a week went by with no success, we met with our midwife and discussed our options. Proceed with a home birth of a vaginal breech baby? Our midwife was willing to do it, but my husband and I weren’t sure we wanted to risk it. Our baby was complete breech with her feet down and my son had been born with a large head, in the 97th percentile, so that concerned us. And we live in a state where CPMs are technically illegal, so we didn’t want to risk a breech birth and have our midwife be prosecuted for it. Schedule a cesarean? It seemed so drastic after planning a home birth…not to mention it brought with it so many risks.

I decided I wanted to try an external version. Thankfully, we found a doctor who was willing to do one for us. He practiced in another state and our midwife had transferred patients to his practice before so we trusted his judgment. We decided that if the version was unsuccessful that we would go ahead and proceed with a cesarean section that day. I felt that if our birth had to be by cesarean, I didn’t want it to be an emergency, and I wanted this doctor, whom I trusted, to perform it, so I felt it was best for me not to wait until I went into labor.

On January 6th we checked into the hospital. The night before my husband read me the Change of Plans script. It helped me to cope with all of the emotions I was feeling. I needed my Bubble of Peace as soon as we got to the hospital. There was a problem with my paperwork and everybody kept saying I was a “scheduled Cesarean.” I had to keep telling them that we were there for an external version- I didn’t want to keep hearing them say “cesarean.” A nurse came in and put me on the monitor and told me that when she was pregnant her babies were breech, and she had tried versions but they were unsuccessful. Again, Bubble of Peace. I didn’t need to hear her negativity!

Next came an IV. It would have been a nightmare had it not been for my Peace cue. It took 5 attempts to get my IV started. I was so dehydrated from not having anything to eat or drink (I had to prepare as if I might have a cesarean) and the nurse had trouble finding my veins. I just kept saying to myself “peace, peace, peace” and I got through it. The nurse remarked on how impressive my composure was.

The doctor arrived and performed an ultrasound. Our baby was indeed still breech, in the complete breech position with knees bent and feet at the bottom. The baby was mostly on my left side with a lot of open space on the right, so the doctor said he would try to get the baby to do a forward roll into the extra fluid on my right side.  I was given a shot of turbutaline to relax my uterus since I was having a lot of Braxton Hicks contractions, probably from dehydration. My husband and I said a quiet prayer together, that my baby and I would be safe no matter what the outcome.

When it came time for the version, my husband and doula stood at my side. I used my finger drop and immediately went OFF, completely loose and limp. The doctor squirted a lot of jelly on my belly and began firmly, but gently, moving our baby with his hands. Within a minute the baby was transverse. He checked the baby’s heart tones and continued. Another minute and a half later our baby was head down. The entire process had taken less than 5 minutes. I could hardly believe it- it happened so easily! I opened my eyes and the first person I saw was our nurse Amy. She winked at me. I smiled back at her with relief.

The doctor stayed and chatted with us for awhile after the version. We decided to keep the baby on the monitor for 4 hours, just to make sure the version hadn’t caused any stress, and then we could go back home. He said that my relaxation during the version was crucial to its success. The doctor said that my “abdominal muscles felt like butter” and “wherever you were, Hawaii, Cancun, wherever, I’d like to be there too!” I was able to be that relaxed because of my Hypnobabies training.

We went back home and waited for labor to begin. Nineteen long days later, at 42 weeks, 2 days, the Braxton Hicks contractions I’d been feeling for months finally turned into labor. It began around 6 in the morning. I took a shower, ate breakfast, and called my sister to come pick up our son. I listened to my favorite CD and walked around the house-it was much too cold to walk outside. When a pressure wave would come, I stopped and leaned on my husband for support. He would whisper relaxation cues into my ear and sway me gently from side to side. It was very romantic. We ate lunch and watched a funny TV show. Around 1 I decided to go try to rest. I put on my Deepening CD and feel asleep for at least 20 straight minutes without a wave, it felt so nice.

When I woke up from my nap we were ready for our doula to come. We stayed upstairs in the bedroom with the lights low. I sat on my birth ball and leaned into a stack of pillows during my pressure waves. She warmed a rice sack in the microwave and put it on my back which felt really nice. Around 5 I had a wave that double peaked and thought “uh oh!” Our midwife Liz wasn’t there yet and we hadn’t made the bed! I was so calm and comfortable that I had no idea how far along I was. My husband and doula called Liz, made up the bed and by the time she got there I was in full-on transition. It was very intense, and I was struggling to cope. I began to feel a lot of pressure during my waves. A few more went by and I realized I was holding my breath and bearing down at the top of them. I said to Liz “I think I’m pushing.” I then had my first and only vaginal exam. Liz said all that she could feel was my baby’s head so I was free to push however I’d like to.

I began pushing on my side but didn’t feel like it was effective. Liz suggested hands and knees so I tried that. With the first push in that position my water broke. I was glad that it had remained intact for so long, protecting my baby. I pushed a few more times and began to feel discouraged. Everyone there was encouraging to me to keep going, that I was doing fine. My husband got in front of me on the bed and I clung to him, drawing strength from him to keep pushing. I looked him in the eye and said “Honey, I don’t think I can do it.” He said “You ARE doing it. I know you can.”

I pushed awhile longer but still felt so discouraged and unsure. I didn’t realize how close I was. Liz said, “Sarah, feel this baby. Push this baby into your hands!” I reached down and felt a smooth round head about to crown. With the next push I was crowning. I began to use my Hypnobabies tools again which allowed me to breathe the baby out. We have it on video and it is very beautiful to see how slowly and gently the head came out. The shoulders came out a few seconds later and the baby slid out. I sat back on my heels and there in front of me on the bed was a beautiful baby GIRL…that part was a surprise J I was so happy and so grateful. I said “Thank you Jesus for this girl!” and clutched her to my chest. It was one of the best days of my life. 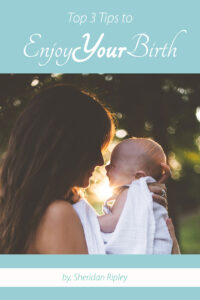 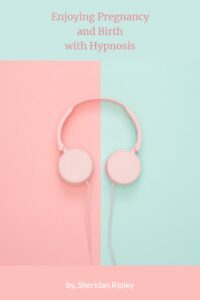 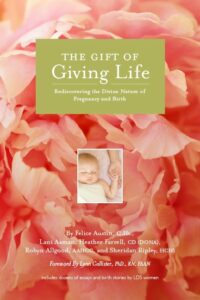 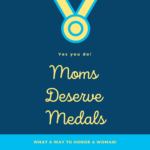