I had 2 moms who were in that 5 week window of baby could come at any time.  Life was good, it was chilly outside and the baby (ok, he is 2 years old, but he is MY baby) needed a nap.  So DH took Carson to soccer and I stayed home to enjoy a bit of quiet.  Baby napping and Devon on the computer.

DH comes home a bit earlier than expected.  I hear him say, “I’ll get the ice.”  I hear whimpering.  I go out.  Carson is on the sofa crying.  He got kicked 2 times and his leg really hurts.  Even later in the day he refuses to put any weight on it.  We call his pediatrician.   She says if he won’t bear weight on it after dinner, to take him to Urgent Care.

To make a long story short, he wouldn’t bear weight on it, we took him in and he had a broken leg.  He was pretty miserable until Monday after he got his real cast on.  But he was still homebound until we got his wheelchair, 3 days later.  Let me tell you I went about crazy calling Apria Home Care about where the wheelchair was.  They kept promising me it would get there “today” for 3 days! 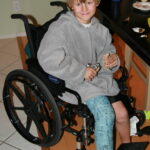 The stress of being a doula when your child gets hurt

4 thoughts on “Please no one go into labor this weekend!”